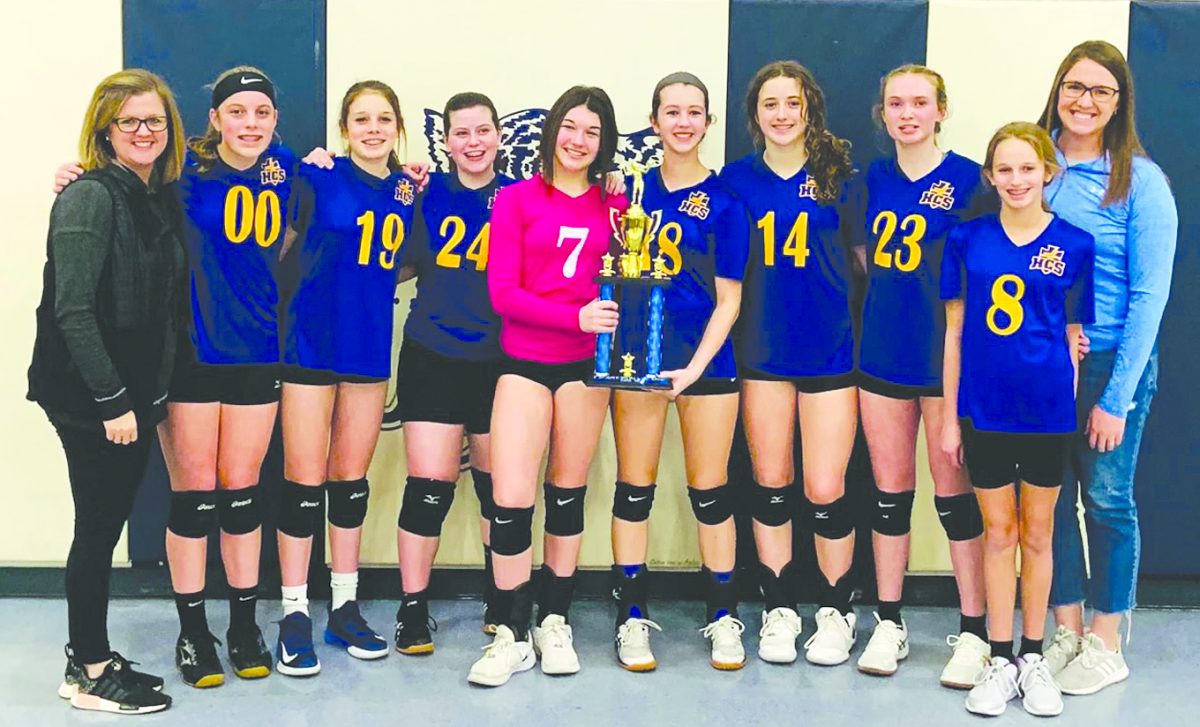 The Holy Childhood School Apaches opened the 8th grade girls’ volleyball season last week at the St. John Catholic volleyball tournament in Smithton. In first round action on Monday, HCS took on the St. James Trojans-Millstadt. The first set got off to a flying start with Taylor Cahill recording six aces in a nine-serve run, followed by Avery Beer with a run of seven serves. Out to an early 16-1 lead, the Apaches never looked back and took the first set 25-5. The second set did not go as well, however, with missed serves and unforced errors by the Apaches that allowed St. James to win the second set 27-25. The third set went much better with the Apaches dominating 15-4, with solid play at the net by Bella Mejia.
In the second round of the tournament on Wednesday, the Apaches faced Blessed Sacrament-Belleville. The Apaches didn’t mess around, winning in straight sets 25-18 and 25-13. Cahill and Beer, and Hannah Killian all went on nice service runs during both sets, with Izzy Bridegroom serving out the last three to win the first set. Chi Chi Uptergrove had a nice night with some thundering spikes, resulting in 8 kills out of 11 attempts that really set the tone for the evening.
In Thursday night’s semifinal action the Apaches played St Teresa-Belleville 7th grade team.
They again won in straight sets 25-8 and 25-15. Lefty Emma Amann played well in this matchup as right-side hitter with a couple kills.
Friday, the Apaches made it a quick night against rival Queen of Peace- Belleville in the championship game. HCS came out strong and won the first set 25-15 and the second set 25-23 to secure first place in the tournament. Uptergrove had a stellar night, with 10 aces and eight kills at outside hitter. Jordyn Fritz was solid at the net in the middle hitter position with some nice net play to keep the rallies going. When asked about the strong start to the first week of the season head coach Sara Beer responded, “The girls improved every game, and they were a lot of fun to watch!”
This week Holy Childhood was scheduled to face St. John-Smithton at home Tuesday night, and then at St. Clare-O’Fallon Thursday night.