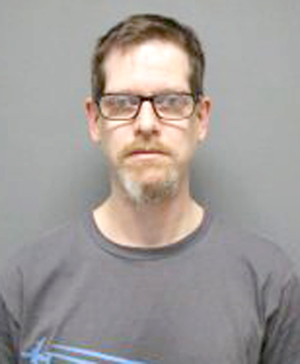 As a result of an incident, described by local police as following a “road rage” situation involving two drivers, that occurred on the parking lot of Fairview Heights business, a Mascoutah man has been charged by the office of St. Clair County State’s Attorney James F. Gomric with aggravated battery – great bodily harm, a Class 3 Felony.

According to police in Fairview Heights, the circumstances leading to the charges issued Saturday, April 16, occurred on the property of the TGI Friday’s restaurant on Salem Place, just east of Illinois Route 159 and north of Interstate 64.

It was there that a vehicle driven by Danny R. Brackey II, 43, of Mascoutah struck and injured Robert C. Kurdziel, 54, of East Alton who was taken by ambulance to an area hospital with life-threatening injuries where he was originally listed in critical condition but remained in stable condition over Easter weekend.

Police, who responded to the TGI Friday’s lot at 6900 North Illinois Street, about 1:35 p.m. on Thursday, April 14, believe the contact with Kurdziel by Brackey’s vehicle was the result of a “road rage” conflict between the two that began in O’Fallon east of Fairview Heights earlier the same day.

Brackey drove away from the scene, going east on Salem Place, the report from police stated, but then called in to provide his whereabouts and was soon thereafter apprehended by Fairview Heights officers after his location was confirmed by police in O’Fallon.

Witnesses at the scene in Fairview Heights provided police with accounts of seeing what happened to Kurdziel after he had driven his car toward the Lotawata Creek Southern Grill restaurant on Salem Place across the street from TGI Friday’s and apparently noticed Brackey was following behind him.

Having pulled into the Friday’s lot, Kurdziel told his wife to go inside to get them a table then he got out of his vehicle and walked over to speak with Brackey about what had occurred involving the two motorists in O’Fallon.

After what police described as a heated exchange, Kurdziel walked away then was struck from behind by the vehicle driven by Brackey before he drove off.

Brackey was taken to St. Clair County Jail in Belleville where he was being held pending $75,000 bond.

All suspects are presumed innocent until proven guilty in a court of law.