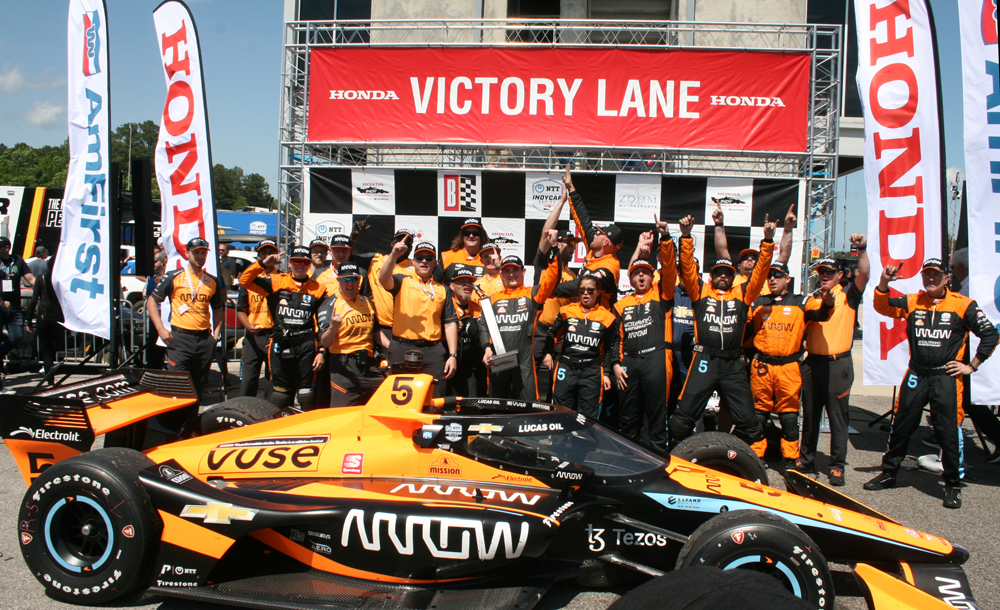 The pandemic postponed our coverage of the Gran Prix of Alabama in 2020 and 2021. The race was canceled in 2020, and the 2021 race was limited live press coverage. This year it finally happened and we were able to cover the event! Photographer Greg Junge and I had visited Barber Motorsports Park in 2016 and 2019. The racetrack sits on 880 acres of property on the outskirts of Birmingham, Alabama, which also features the biggest Motorcycle Museum in the world and is one of the toughest road courses on the INDY circuit. The track has 17 different turns and covers 2.38 miles. Each turn has a different strategy and passing is difficult. Winning the race takes a good starting position, maintaining good track position and zero mistakes on pit road. No one has won the race from further back than the 9th starting position.
The weekend was jam packed with racing. We saw 10 different races from 6 different series. The weather was perfect Friday and Saturday with rain Sunday morning and then clearing for a period enough to get the Indy Lights warmup race in at 10:00 and the Indy Grand Prix race in starting at noon.
Practice and smaller series races were on Friday. Saturday was more races and qualifying while Sunday was INDYCAR race day. INDYCAR knockout Qualifying on Saturday started with two groups of 13 then the fastest advance to the next round of 12 before getting to the final six. Rinus Veekay was the pole winner with a speed of 124.980. Pato O’Ward was second and Alex Palou, last year’s race winner was third. Former NASCAR racer, Jimmie Johnson coming off a hand injury did not fare as well starting in the 26th position.
The Indy Lights series race began with the cars on treaded rain tires due to the wet track. The drivers blew through the water and created huge plumes of water in their wake. The drivers at the back were showered with the water created off of the tires of the front runners. Taking corners at high speeds on dry track is difficult. Taking corners at high speeds on a track with water was truly something to see. Linus Lundquist started this race on the pole and went wire to wire. It was a close finish as second place finisher Benjamin Pederson edged out Sting Ray Robb (third).
The track was almost dry by the time the NTT INDYCAR SERIES race started. Pole setter, Rinus Veekay dominated the opening sixty laps. Only one caution occurred with car 77 Callum Lott spun into the gravel in turn 7 near the muesum. After the second pit stop, Veekay was cautious around the fifth turn and Pato O’Ward saw the passing opportunity and got around Veekay. Alex Palou also was able to get around Veekay. Once O’Ward got to the front he did not look back and won the race. Palou finished second and Veekay ended up third.
“You have very few opportunities to pass on this track. When I saw the chance I took it. We had a great car and I was happy for the team today,” said O’Ward. It was O’Ward’s first win at Barber.
It was an exciting weekend of racing and another cool place to spend time watching a race!