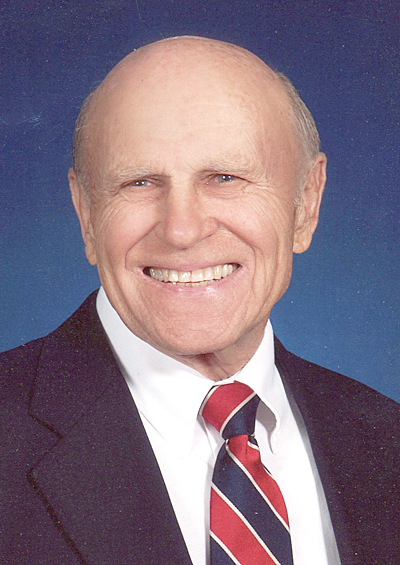 Richard J. Augustine, of Florissant, Mo, passed away suddenly on April 27, 2022. He and his wife, Ellen Kaye, had spent most of the beautiful spring day enjoying working in their yard and watching the house wrens explore the available birdhouses. A big thrill to Dick was seeing several wrens checking out the little house his dad had helped him build over eighty years ago. When Ellen Kaye went inside to fix supper, Dick remained outside to sit on the patio to admire the day’s projects and put gardening equipment away. After a day enjoyed to the fullest, he passed away in the beautiful back yard he so loved.
Dick was born October 27, 1927 in his beloved Mascoutah, IL. He is survived by three sisters, Betty Rakers of Weymouth, MA, Helen Aiello, and Phyllis Hammond of the St. Louis area and loving cousins, nieces and nephews. He was predeceased by his parents, Elsie and August Augustine, older brother, August, and his son Richard “Rick.”
Dick had two loving marriages. His first marriage was to Ruth Catherine “Suzie” Nicolson in 1955. They welcomed three sons (two years apart), Donald M. (Darice), Richard, Jr., and Thomas W. (Lisa). Suzie passed away suddenly in 1998. He was the devoted grandfather of seven: Matt (Miranda Portwine) Krone; Amanda (Jim DeMeo), Rikki, Cathryn, John, Madison, and Kyla and two great grandchildren, Tilly and Sev. Dick loved to reminisce about those busy days of his young children and grandchildren.
In May of 2003 he and Ellen Kaye Murphy were married at Church of the Master. They had met two years earlier at an event at Bethany Peace Church, Dick’s church. Their first date was to pick up mulch for their respective gardens! Ellen Kaye retired from teaching in 2004 so they could have more time together, neither one ever dreaming that they would have almost nineteen years. This marriage added his three bonus children: Sarah (Richard) Wurl, and Drew (Kathy) and Eric (Ashley) Stevenson and seven more grandchildren. Those lucky grandchildren are: Katherine, Rebecca, and Alexander Wurl and Juliana, Natalie, Noelle, and Samuel Stevenson. Dick loved babies and children; Drew called Dick “the baby whisperer” because he was so good with babies.
Dick graduated from Mascoutah High School and received a B.S. in Electrical Engineering from the University of Illinois. He worked for Emerson for over thirty years and six years at McDonnell-Douglass Electronics Company where he spent most of his career marketing defense products. He found his job exciting and traveled a great deal. He spent three years in Washington, D.C. working the halls of the Department of Defense and Congress. Before college graduation, he proudly served in the U.S. Navy where he was steered toward his future career.
In retirement Dick was an ardent volunteer. He worked over ten years at the Botanical Garden, was active in church leadership and projects, participated in Habitat builds, distributed food at Helping Hands Food Pantry, and tutored for Oasis. He worked at all the elections until his hearing made it impossible. At the time of his death he still delivered for Meals on Wheels and helped with the landscaping at church and in Paddock Forest neighborhood.
Dick was a passionate nature enthusiast. He found beauty and relaxation when he could gaze out into our natural world. He and Ellen Kaye walked miles and miles in their time together enjoying the beauty and and variety of God’s creation. They traveled domestically and internationally with Friendship Force and on their own. One of his favorite trips included Slovenia where all four of his grandparents were born.
He held season Rams and Muny tickets for years. While Suzie worked for the St. Louis Symphony, Dick loved the many performances he attended. He was an inveterate newspaper reader, belonged to a canasta group, and played pinochle weekly.
Ultimately, his family was his greatest joy! His was a life well lived.
Services will be held at Church of the Master, UCC, 1325 Paddock Dr., Florissant 63033 on Monday, May 16 with visitation starting at 10:00 and a memorial service at 12:00. In lieu of flowers, please consider a donation to Meals on Wheels of Greater St. Louis, the Missouri Botanical Garden, or Church of the Master in Dick’s memory.