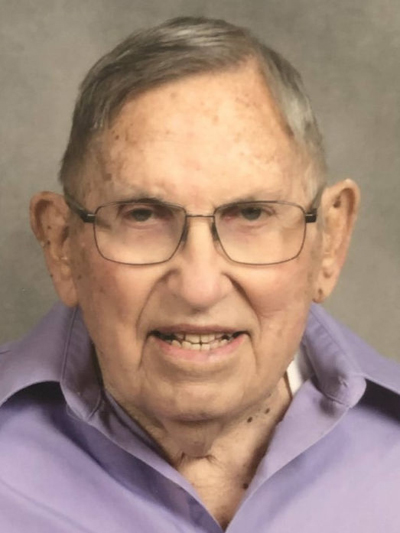 Robert W. “Bob” Twenhafel, 89, of Mascoutah, IL died on Tuesday, December 20, 2022, at Friendship Manor in Nashville, IL.
Bob was born in Hoyleton, IL, on June 15, 1933, to Martin H. and Clara, nee Kraus, Twenhafel. He graduated from Nashville High School in 1951 and served as a Corporal in the U.S. Army from 1951-1953 in Ft. Sill, OK, where he received the National Defense Service Medal and the Good Conduct Medal. On June 14, 1958, Bob married Janet Kneschke of Mascoutah, IL, where they made their home in 1964. Bob worked the majority of his career as a salesman for Harvestore, from which he garnered many awards and accolades for outstanding sales performance. Bob enjoyed an extremely active social life with hobbies including card playing, softball, golf, jigsaw puzzles, crafting, working in his flower beds, and following his beloved St. Louis Cardinals. Bob’s number one interest and greatest source of pride were his five grandchildren. He was a proud and devoted grandpa who, until he was physically unable, attended his grandkids’ many activities over the years. Throughout his life, Bob served in numerous volunteer organizations, including March of Dimes, Jaycees, Mascoutah Evening Lions, Mascoutah Food Pantry, and the Mascoutah Senior Center. His greatest service was through his church, Zion Evangelical Lutheran Church in Mascoutah. He was a humble servant and had many leadership roles within the church, but the role which was his true vocation was that of evangelism; Bob shared his faith openly with everyone he encountered and considered it his greatest mission to show the love of Christ to all.
He is preceded in death by his parents, his cherished wife, Jan Rose, nee Kneschke, who died on Oct. 27, 2010, a brother, Willard, and a sister, Agnes, in infancy.
Bob is survived by his children, Kathy (Keith) Woodward of Wichita, KS, Terry (Beth) Twenhafel of Smithton, IL, Kara (Jake) Simon of Webster Groves, MO; 5 grandchildren, Lauren and Adam Twenhafel, Daniel Woodward, Mia and Lola Simon; great-granddaughter, Nymeria Woodward; sister, Pearl Twenhafel, aged 96; a sister-in-law, Marion Kneschke.
Over 75 years ago, Bob chose as his confirmation verse Revelation 3:11, “I am coming soon. Hold on to what you have, so that no one will take your crown.” At the end of His life, the disciple Paul testified that he had finished the race of human life and anticipated the crown of righteousness as a reward from the Lord, the righteous judge. Bob completed his race with discipline, faithfulness, patient endurance, and has been rewarded with the crown of righteousness.
In lieu of all other gifts memorials may be made to Zion Lutheran Memorial Fund, 101 S. Railway, Mascoutah, IL 62258 or Unity Lutheran Christian Elementary School, 1600 40th St., East St. Louis, IL 62204.
Visitation: From 9 to 11 AM Tuesday, Dec. 27, 2022 at Zion Lutheran Church, Mascoutah, IL 62258.
Funeral: A funeral service will be held 11 AM Tuesday, Dec. 27, 2022 at Zion Lutheran Church with Pastor Kirk Clayton officiating. Burial with military honors will follow in Mascoutah City Cemetery.