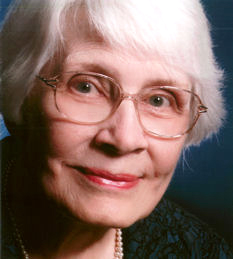 Marilyn M. Breitling, nee Miller, age 84, of Glen Carbon Illinois, born on August 5, 1933 in Ashland, Nebraska. Her parents Donald and Laura Jarman Miller were well known pioneer families.
She attended a one room country school and graduated from Ashland High School in l950. Marilyn attended Doane College for two years where she met her husband Patrick. Marilyn left Doane to teach elementary school in Sutton Nebraska and Patrick became a 2nd Lt in the USAF.  They were married in 1953 and moved to St. Louis where Patrick continued his studies. During subsequent tours of duty at Rapid City, Honolulu, Washington DC, and Scott AFB and a return to St. Louis, Gale, Jean, and James here born and grew up.  Following the untimely death of their parents, Victoria, Randy, Robert and Lisa became a part of the family.  The family joined Samuel UCC beginning a lifelong affiliation for Marilyn and Patrick.  Wherever the USAF took them they joined UCC church becoming active members. Marilyn was called to National Church ministry of the UCC in 1975 joining the staff of the Office for Church Life and Leadership, with focus on Women’s issues; she became Executive Director of the UCC Coordinating Center for Women in Church and Society. She subsequently became the director of Continuing Education of Eden Theological Seminary retiring in 1995. In the years since her retirement she has been an active volunteer at Samuel UCC in Clayton, MO and many ecumenical and UCC activities and an involved and loving mother and grandmother.
She is pre-deceased by her parents, beloved son James, grandson Nathan, brothers Donald and Gerald, and cousin Sally Howell.
She is survived by her husband, Patrick Breitling, daughters, Gale Stipes, Lily Jean Bergin, Victoria Breitling, and Lisa Campbell; sons, Randy Breitling and Robert Breitling; granddaughters, Amanda Perry (Claire), Kelsey, Jessie, and Lauren; grandsons, Carson Campbell and Justin Stipes; and many nieces, nephews, cousins, and a host of colleagues and friends.
Memorials may be given to Samuel UCC, 320 N. Forsyth, Clayton, MO 63105. Condolences may be sent to the family by visiting mollfuneralhome.com.
FUNERAL:  A memorial service will be held 1 PM Saturday, June 2, 2018 at Samuel UCC in Clayton, MO with the  Rev. Dr. Jeff Groene officiating.