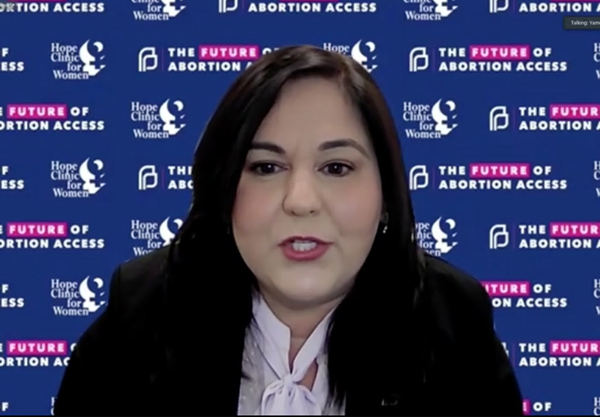 More than $73,000 in financial aid has helped more than 800 women in recent months

SPRINGFIELD – Hoping to make abortion care more accessible, a facility near St. Louis is set to be the “first of its kind” in providing financial assistance for travel-related costs.

A Regional Logistics Center was opened Friday in a Planned Parenthood clinic in Fairview Heights. Using private funds, the center will pay for travel and lodging arrangements and connect patients to resources and support organizations in all 50 states.

“Together, we are breaking down the silos anti-abortion politicians have created, and proving that … with innovation and determination … we can secure a future with abortion access,” Yamelsie Rodriguez, president of St. Louis Planned Parenthood, said during an opening event Friday.

Rodriguez said the RLC will be operated by Planned Parenthood and the Granite City-based Hope Clinic for Women in response to more restrictive abortion laws in other states and to the lack of access for women in rural areas.

Planned Parenthood and Hope Clinic have been planning for the center since 2019, when Gov. JB Pritzker signed the Reproductive Health Act which guarantees that reproductive health, including abortion, is a fundamental right in Illinois.

“The idea that we’re protecting those rights with the Reproductive Health Act in the state is vital,” Pritzker said Friday.

Since a soft opening in December, the center has provided 138 rides and flights and housed dozens of women in need of overnight stays.

Rodriguez is projecting an additional 14,000 women from conservative states are likely to travel to the region for abortion care if Roe v. Wade, the 1973 U.S. Supreme Court case that legalized abortion nationwide, is overturned.

“With reproductive rights under attack across the United States, it’s never been more vital for the state of Illinois to ensure access to reproductive services,” Pritzker said. “Let’s be loud and clear – abortion restrictions endanger women.”

Saturday is the 49th anniversary of Roe v. Wade. Abortion access in conservative states such as Missouri, Texas and Arkansas has become more restrictive in recent years, leading women to travel in search of reproductive health care services.

“The hardest part is knowing that these hurdles have been systematically manufactured by anti-abortion politicians whose goals are to ban abortion,” said Kawanna Shannon, director of Patient Access for RLC. “Access to abortion doesn’t have to be like this.”

Rodriguez said Planned Parenthood of St. Louis has seen steady annual increases in out-of-state patients traveling for abortion care. Since a Texas abortion ban took effect in September 2021, Rodriguez said, more than $73,000 in financial assistance has helped more than 800 women travel to the southern Illinois facility. There has been a 40 percent increase in patient visits, she said.

“This law just had a rippling effect that is causing all patients, even in states where abortion is still legal and available, to travel outside of their home state in order to find appointments,” Rodriguez said.

There is no income or distance requirement to access RLC services. Patients must schedule an appointment with Reproductive Health Services or Hope Clinic for Women before contacting the RLC for logistical support.