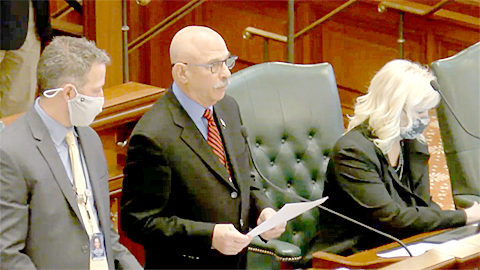 Democrat motions for their removal ahead of private caucus

SPRINGFIELD – Confusion and pushback regarding the enforcement of masks mandates spilled over onto the House Floor Wednesday afternoon during the chamber’s regular legislative session after Republicans refused to comply with face covering requirements.
Amid the pandemic, lawmakers approved House rules requiring face coverings to be worn in the chamber unless eating, drinking or speaking into the microphone.
During Tuesday’s session, House GOP members entered the chamber without wearing masks and released a joint statement saying that the mandates have “gone on long enough” and that it is “time to return to normalcy.”
To open the session Wednesday, Rep. Dan Caulkins, R-Decatur, who was among several GOP members refusing to wear a mask, requested an immediate vote on a resolution he sponsored to lift the face covering requirement.
But Majority Leader Greg Harris, who was presiding over the chamber, denied the motion saying it did not have unanimous approval.
Caulkins then requested for all members of the House to be removed in accordance with the COVID-19 mitigation requirements, since they also require members to submit to a temperature check prior to entry.
No such temperature checks were being preformed Wednesday, however.
Harris agreed to have doorkeepers check the temperature of each lawmaker present in the chamber, but Caulkins objected and argued that it must be “prior to entry,” and he suggested the House follow all of the rules or none of them.
All lawmakers passed the subsequent test.
After that, Rep. Lakesia Collins, D-Chicago, motioned to remove Caulkins, Adam Niemerg, R-Dieterich, Brad Halbrook, R-Shelbyville, Blaine Wilhour, R-Beecher City, Chris Miller, R-Oakland, Andrew Chesney, R-Freeport, and Martin McLaughlin, R-Barrington Hills, if they do not comply with the House rules requiring face coverings.
But after that motion, Republicans requested an immediate caucus. After about an hour, lawmakers returned and quickly adjourned to committee for the day without any further commotion about the mask mandates.
The incident was indicative of the general statewide confusion pertaining to mask mandate enforcement, according to one GOP member who was wearing a face covering Wednesday.
Rep. Mark Batinick, R-Plainfield, who was an early proponent of masks even before the governor’s mandates, said that with recent court rulings regarding mask mandates in schools and a lack of clarity from lawmakers and the governor on masks rules, many Illinoisans are confused as to what is actually required.
“I think what we are seeing right now is the chaos that the General Assembly has let happen with school boards and people throughout the state,” Batinick said.