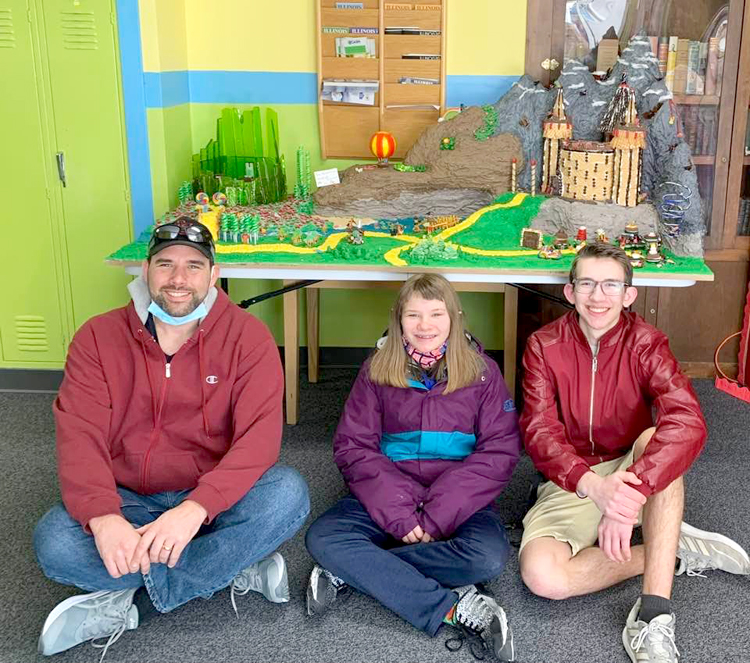 The Miller Family – Doug, Paige and Grant – pose with their Wizard of Oz display at the New Baden Library.

Wizard of Oz display includes the Emerald City made out of melted sugar.

Wizard of Oz fans will love the creative details, especially the Emerald City, currently on display at the New Baden Library. The detail work on the castle is extraordinary: everything from the yellow brick road from Munchkin Land, flying monkeys at the wicked witch’s castle to the towering Emerald City made of melted sugar.

The creative project was built by Grant Miller of New Baden, and members of his family. Past projects have included a huge ship based on Pirates of the Caribbean, and Harry Potter castle complete with characters.
According to Grant, an 18-year-old graduate of Wesclin High School, the entire display was built on weekends from November to December.

“Right before Christmas, we had a week of holding the kitchen hostage at 6+ hours per day, and finalizing the touches about a week and a half into January,” said Grant.

Boxes were used for the underlying structures, along with Styrofoam to mold and shape. Then cement icing was made for the base color, and finally assorted candy and homemade candy glass were added to the final touches.

“The hardest part was the candy glass,” explained Grant. “We went through several batches of melting, shattering, and burning sugar crystal before getting the right result.”

The majority of the projects have always been between his dad Doug and Grant, “planning and chugging along the tedious hours of measuring, securing, gluing, shaping, buying, and mixing (icing).”

Other members of his family lent moral support and helped during the application of the icing base and the placing of candy.

Grant currently works a part-time job and have plans to attend college at Brigham Young University-Idaho this Fall.