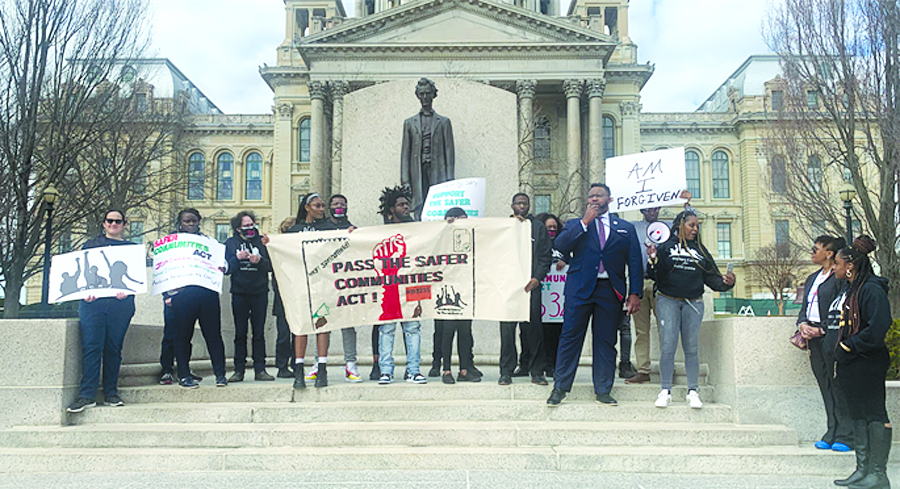 SPRINGFIELD – Members of the Workers Center for Racial Justice held a rally in front of the Capitol Wednesday morning demanding the Illinois General Assembly pass the Safer Communities Act.
The measure, House Bill 3215, offers job providers wage subsidies for hiring formerly incarcerated individuals at a living wage over a five-year period.
Rep. Kam Buckner, D-Chicago, said that when people come home after being institutionalized, their “second sentence” begins due to lack of opportunities and programs in place to help them integrate back into the community.
The bill’s current status as of Thursday was “re-referred to Rules Committee,” a legislative designation that generally means such a measure is unlikely to move, at least in the current General Assembly. But the advocates urged that the program be included in the final budget package.
The bill would provide a living wage job creation program for up to 20,000 formerly incarcerated workers for the duration a five-year pilot incentive period, which would begin on March 1, 2023, and end on Feb. 28, 2028. It would allow businesses that hire formerly incarcerated individuals on a union contract or at a wage of $20 hourly plus benefits to receive wage subsidies for those employees.
A maximum of 10,000 participants would consist of individuals released from prison on or after Jan. 1, 2022. The other 10,000 participants would consist of individuals released from prison between Jan. 1, 2012, and Dec. 31, 2021.
The businesses would receive a $1,250 monthly wage subsidy for an employee hired in a “disproportionately impacted area,” meaning a census tract with high rates of arrest, conviction and incarceration among residents, and $850 monthly in other areas.
Those seeking to participate in the pilot program would be required to register with the Department of Employment Security on or after Jan. 1, 2023.
Jimmy Miller, longtime member of the Chicago-Based grassroots organization WCRJ, said when reintegrating into society after incarceration, he found it difficult to find a job. The passage of the HB 3215 would help provide job opportunities and employment resources to other formerly incarcerated individuals like himself, he said.
“Community is important, not only to myself but for those who will be newly released,” Miller said.
The bill caps the expenditures during the five-year incentive period at $1.5 billion. If requests exceed that amount, subsidies would be given on a first-come-first-served basis.
Applicants who hire participants as a full-time employee during the incentive period could apply for a certificate of eligibility for the wage subsidy on or after the date of hire. The applicant must provide the department the names, social security numbers, job descriptions, salary or wage rates, dates of hire and state whether each participant is registered in the pilot program.
Rep. Justin Slaughter, D-Chicago, said investing back in Black and brown communities and building the local economy through the living wage job creation program could help end mass incarceration.
According to the data from the Illinois Department of Corrections, as of Dec. 31, 2021, there were 27,970 people in prison. More than half, 15,204 or 54.4% of those individuals, were Black, according to the data.
Avalon Betts-Gaston, project manager for the Illinois Alliance for Reentry and Justice, said that individuals should “never be judged by a conviction in a system that was designed to mass incarcerate Black, brown and poor people.”
Members of WCRJ called on legislators to secure funding in the fiscal year 2023 budget for the Safer Communities Act.
In the proposed budget for FY23, Gov. JB Pritzker proposed $250 million in federal funding for the Reimagine Public Safety Act that would help fund early intervention programs. He also proposed $50 million to the competitive violence prevention grant program to provide resources to Illinois’ community partners to help stop the pattern of violence in areas disproportionately impacted.