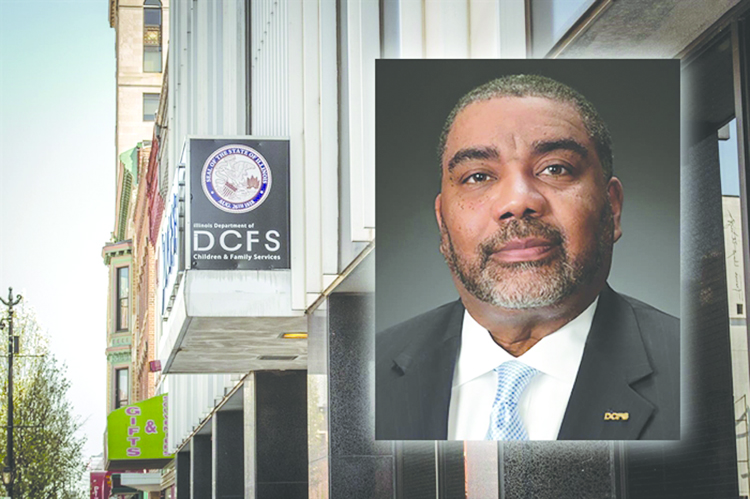 DCFS Director Marc Smith has been held in contempt of court for the seventh time in 10 weeks. (Capitol News Illinois illustration)

A 13-year-old boy was kept in a “temporary” shelter in Mt. Vernon for nearly five months. Before the shelter, DCFS placed him in a utility room in an office.

SPRINGFIELD – For the seventh time in 10 weeks, a Cook County judge found Illinois Department of Children and Family Services Director Marc Smith in contempt for failing to comply with a court order.
DCFS was ordered by a judge in March 2021 to move a 16-year-old boy who has low intellectual functioning and cognitive delays from his temporary shelter to a placement to meet his needs, according to the Cook County Public Guardian’s Office, who represents the boy in court.
Despite a court order entered a year prior and the agency’s own recommendation for a residential placement appropriate for him and his abilities, the boy remains in a temporary placement.
“This boy has spent every major holiday in the last year stuck in a place unable to provide him the care and nurturing he needs,” stated a release from Cook County Public Guardian Charles Golbert’s office.
On Thursday, March 17, Cook County Judge Patrick T. Murphy found Smith in contempt for failing to move the boy and fined him $1,000 a day for every day the boy remains in temporary housing. The fine was stayed until March 24.
“DCFS and our private partners have aggressively been attempting to locate homes for those children. They had been doing it for months. There was no ignoring of the need of those children. And the truth is it takes a lot of negotiation with many providers for them to be able to develop the resources to care for those individual children,” Smith told a Senate appropriations committee on Thursday.
It was hours before Smith faced a seventh contempt order from Murphy. In two of the seven cases, the contempt order was purged when the kids were placed in their recommended setting. Those two cases involved:
• An 8-year-old girl placed in a locked psychiatric hospital unnecessarily for more than seven months.
• A 13-year-old boy kept in a “temporary” shelter in Mt. Vernon – nearly five hours away from his family – for nearly five months. Before the shelter, DCFS placed him in a utility room in an office.
In the other four previous cases, the contempt order remains in place and the children remain in their present settings. Those cases involve:
• A 17-year-old boy who was placed in a locked psychiatric hospital for more than four months beyond medical necessity.
• A 16-year-old girl housed in 25 different places in two months, including hospitals, emergency shelters, a shelter in Indiana, and temporary foster homes. Before that, she was in a locked psychiatric hospital for nearly two months after it was recommended that she be moved.
• An 11-year-old girl medically approved for discharge from a locked psychiatric hospital for nearly a year waiting for a transfer to a residential placement.
• A 15-year-old girl placed in a locked psychiatric hospital since December 6, 2021 – approximately three months waiting for transfer to a specialized foster home.
Each of the seven children in these cases is represented by the Cook County Public Guardian’s Office. The orders for contempt were signed by Judge Murphy, who served for 25 years as the Cook County Public Guardian.
DCFS has placed 356 children statewide in inappropriate settings for an average of 55 days, Golbert said. There were so many children that Murphy, the presiding judge over the child protection division, created a separate “beyond medical necessity” or “stuck kids” docket.
A court order in one of the contempt of court cases filed against Smith noted that in 2020, DCFS had 314 wards in psychiatric hospitals beyond the date of discharge. In 2014, there were 75 DCFS wards in mental health facilities beyond the date of discharge. That number doubled in 2015 to 168.
Golbert has said that holding a state agency director in contempt of court is extraordinarily rare. In the more than 30 years that he has been practicing in juvenile court, he could not recall a single prior instance where a judge held the DCFS director in contempt.