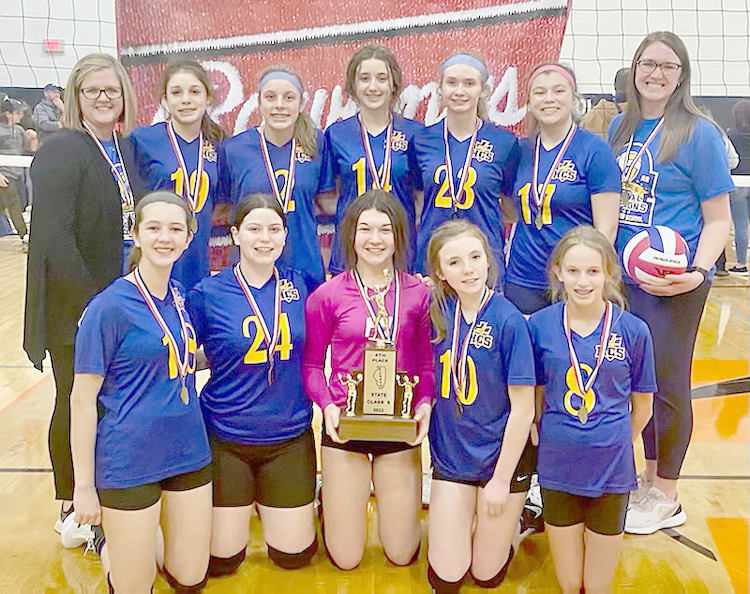 MASCOUTAH – The past two weeks have been busy for the Holy Childhood Apaches, starting with regional action at Valmeyer for the Southern Illinois Junior High School Athletic Association State tournament. In the Regional Semifinals, the Apaches squared off against the host school, Valmeyer, and made quick work of them, winning 25-5, 25-9. The next night at the Regional Championship, the Apaches took on the Falcons of SPPS Waterloo. The Apaches were on a mission to win the Regional and once again won in straight sets, 25-15, 25-18 for Holy Childhood’s first ever volleyball Regional Championship!
Two days later the Apaches started play on the 20th of March as the overall two seed in the Belleville Diocesan Tournament, which is the conference tournament for the schools in the Belleville Diocese. In the first round, the Apaches took on a tough All Saints Academy team from Breese. The Apaches had great games from Isabel “Chi Chi” Uptergrove with eleven kills on the day, Taylor Cahill leading the team with five aces, and Hannah Killian adding two key aces en route to a 25-15, 25-18 victory. In the semifinal, the opponent Blessed Sacrament had their hopes of an upset of HCS dashed, with the Apaches defeating them with nice plays by middle hitters Bella Mejia and Izzy Bridegroom, 25-17, 25-22. On Sunday the Apaches and St. Clare of O’Fallon were set to play in the Diocesan Championship hosted by Althoff High School. The Apaches cruised to victory in the first set, 25-14. The second set started off great, with two nice cross court kills by Emma Amann, and the Apaches had a lead of 22-17. But then, a combination of bad luck and missed plays doomed the Apaches, losing the second set, 26-24. The momentum shifted and the much larger school, St. Clare, took over and won the third set 15-8 on their way to the Diocesan Championship and sending Holy Childhood home with a hard fought second place trophy.
This past Saturday, the Apache’s headed south to Herrin for the State tournament Finals. The final sixteen teams all battle in a single day in the final day of the State Tournament for Volleyball, making it a marathon for those that make it to Finals. The day started off at 7:30am for the Apache’s as they headed south on the bus for the 10:00 game. In the first round, HCS took on Thompsonville. The Apache’s returned to their winning ways, defeating Thompsonville 25-16, 25-20. After a three-hour layoff, the Apache’s returned to action against St. John Red Bud, an opponent that had defeated them in three sets the last time they played. The first set was all Apache’s, winning 25-16. The second set got off to a great start with the Apache’s jumping out to an early lead. There was a scary moment for the Apaches in the second set, with a collision involving two of the Apache’s key hitters, Uptergrove and Jordyn Fritz, both diving for a ball. Uptergrove was able to get up quickly, but play had to stop as Fritz took the brunt of the collision. Fortunately, both girls were ok, and the Apaches continued on with solid play from Peyton Hamilton filling in for middle hitter Fritz until she was able to return to the game. After that collision, Fritz came out even stronger with some key hits in the middle to help seal up the second set 25-18. Now down to the final four teams in the Class S division of the State Tournament, the Apaches were set to face off against St Rose. The first set was all St. Rose, winning 25-17. But the Apaches weren’t going to give up yet. The second set was a back-and-forth affair with St. Rose and HCS trading points until it was 25-25. The Apaches pulled ahead 26-25 and setter Avery Beer gave Uptergrove great opportunities to slam down three of her biggest spikes of the game. Miraculously, St. Rose was able to dig all three of the thunderous spikes, win the point, and eventually winning a hard-fought set 29-27. Holy Childhood moved on to the third-place game, a game that started a full nine hours after they played their first game of the day, against Pinckneyville 204. Between the stressful second set against St. Rose and the long day in the gym, HCS simply ran out of gas in the third-place game, losing 25-22, 25-19 and finishing in 4th place. The Apaches finished a tremendous season with a 20-8 record with 1st place in the St. John Smithton tournament, 2nd place in the Holy Childhood tournament, 2nd place in the Belleville Diocesan Tournament, and for the first time ever for a Holy Childhood Volleyball team, a Regional Championship and a 4th place trophy at the State Tournament.