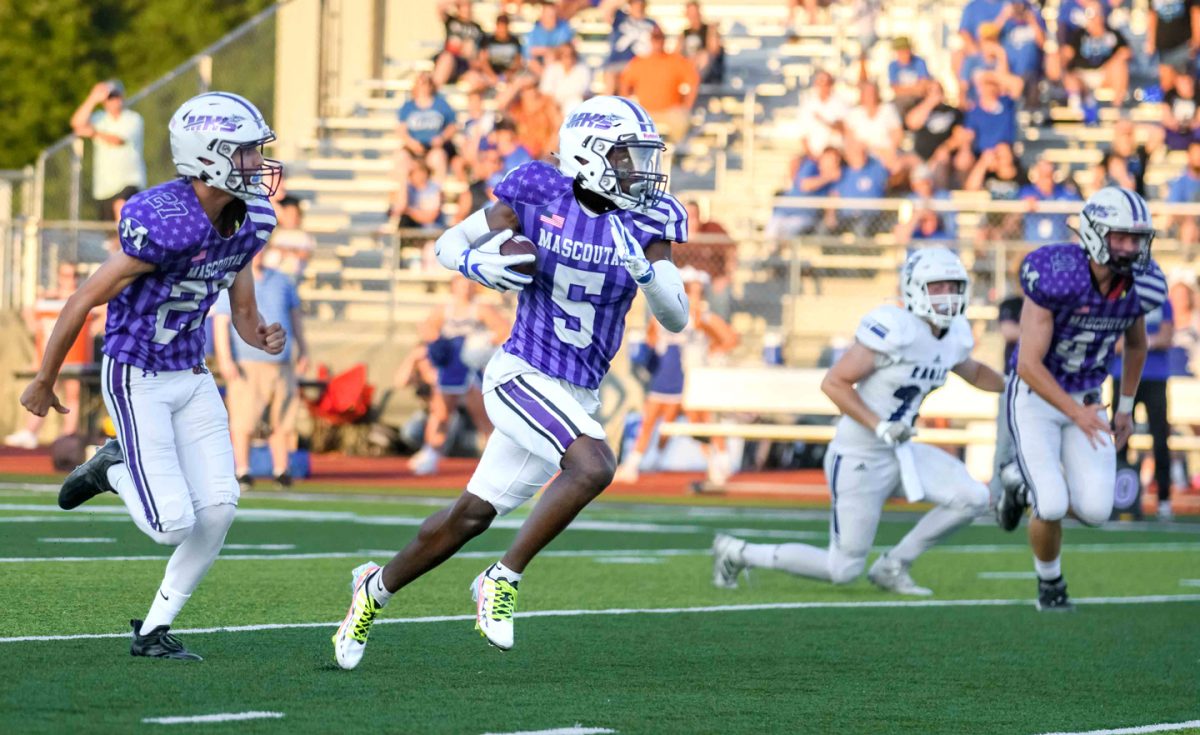 On Friday Aug 26, the Mascoutah Indians varsity football team hosted the Columbia Eagles in their season opener. The Indians defeated the Eagles 49-26. Pictured is Senior Quincy Hall (5) returning an interception for a touchdown on the games opening drive. Hall would complete the game with three touchdowns. Photo by Jim Recuero, TSS Photography

MASCOUTAH – Last weekend was the official start of the high school football season in Illinois. Mascoutah hosted Columbia on Friday, August 26, and defeated the Eagles by a score of 49-26.
The Indians dominated the first quarter with three touchdowns on a 33-yard interception by Quincy Hall, a four-yard run by Hall and a 1-yard pass from Zane Timon to Allen Middleton. Columbia did come back a little in the second quarter when they scored twice and held Mascoutah to one touchdown on a four-yard run by Timon. The Indians maintained control in the second half with touchdowns on a 44-yard pass from Timon to Hall, a three-yard run by Timon and a nine-yard run by Kanoa Owens.
Timon finished with 12 completions on 18 attempts for 219 yards. His top receivers were Middleton with seven catches for 115 yards and Hall with four catches for 89 yards. Timon was also the leading rusher, keeping the ball nine times and gaining 107 yards. Owens gained 60 yards on 12 runs and Hall had 37 yards on three runs.
Leading tacklers were Middleton and Tyler Ballor with six each, Hall and Jacob Fritz with five each and Jakob Church and JT Curry with four each. Church also had one quarterback sack.
Mascoutah’s next game is at Mount Vernon on Friday, September 2.