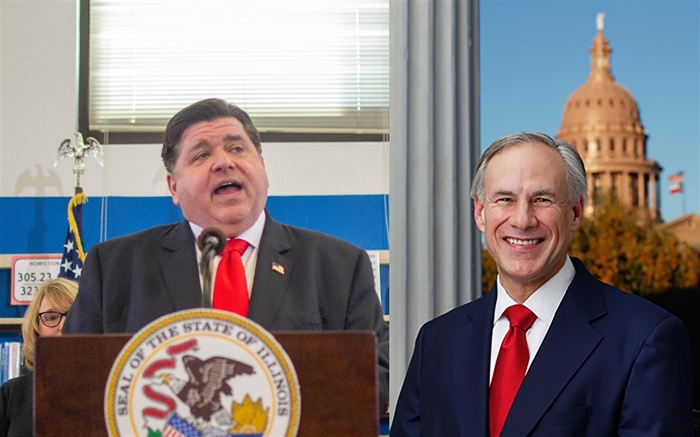 But Illinois Gov. JB Pritzker and Chicago Mayor Lori Lightfoot, both Democrats, say the new arrivals are welcome in Illinois, and they are vowing to make sure the new arrivals receive essential services.

“Illinois welcomes refugees, asylum seekers and immigrants and we are working with federal and city officials to ensure that these individuals are treated with respect and safety as they look to connect with their family and friends,” Pritzker said in a statement Wednesday night. “My great-grandfather came to this country as an immigrant fleeing Ukraine in 1881. Immigrants just like my family seeking freedom and opportunity built this country. Illinois is and has always been a welcoming state.”

Abbott launched the program in April when he issued a memo directing the state’s Department of Emergency Management “to begin coordinating the voluntary transportation” of immigrants who had been released from federal custody.

Abbott began by busing immigrants to Washington, D.C., and later to New York City. Chicago is the third city he has targeted to receive immigrants.
The Chicago Sun-Times reported that most of those arriving Wednesday originated from Venezuela, a country in the grips of a yearslong economic crisis that has reportedly forced some 6.8 million inhabitants to leave their homeland.

Abbott’s memo also directed mayors and county judges to notify the agency of any “drop-offs” by the U.S. Department of Homeland Security “that may necessitate dispatching a bus, a plane, or some other means of evacuating such migrants from our State.”

The move was part of Abbott’s protest of President Joe Biden’s decision in April to end what are known as Title 42 expulsions – a practice used during the Trump administration to immediately expel immigrants, including asylum seekers, arriving at the U.S.-Mexico border based on public health concerns related to COVID-19.

Abbott has complained that the decision to end that program has resulted in an explosion of illegal border crossings into Texas and that the Biden administration has failed to deal with the issue.

“President Biden’s inaction at our southern border continues putting the lives of Texans – and Americans – at risk and is overwhelming our communities,” he said in a statement Wednesday. “To continue providing much-needed relief to our small, overrun border towns, Chicago will join fellow sanctuary cities Washington, D.C. and New York City as an additional drop-off location.”

“Mayor Lightfoot loves to tout the responsibility of her city to welcome all regardless of legal status,” he continued, “and I look forward to seeing this responsibility in action as these migrants receive resources from a sanctuary city with the capacity to serve them.”

A spokesperson for the mayor quickly fired back, posting a statement on Twitter around 8:30 p.m. saying: “We know that racism, discrimination, and human cruelty have played a pivotal role in how immigrants are received within our borders, and we are still working to recover from the previous presidential administration, which encouraged this behavior. This is such an important moment for Chicago as a city has been a sanctuary for thousands of newcomers. We are welcoming them and we will not turn our backs on those who need our help the most.”

According to a timeline by the Chicago Tribune, Chicago officially became a sanctuary city in 2006 with the passage of an ordinance prohibiting city agencies from inquiring about a person’s immigration status when they seek city services.

Another ordinance passed in 2012 prohibits police from detaining anyone solely on the belief that they are in the U.S. illegally and prohibiting them from cooperating with federal authorities when they believe a person’s immigration status is the only reason a warrant has been issued.

At the state level, Illinois lawmakers passed a package of bills in 2021 aimed at protecting the state’s immigrant population, including a requirement for local governments to end partnerships with U.S. Immigration and Customs Enforcement, a law making a person’s citizenship or immigration status a potential motivation for a hate crime, and protections from workplace discrimination based on a person’s work authorization status.

At the same time he signed those bills, Pritzker also signed an executive order establishing a Welcoming Illinois Office within the governor’s office to develop and coordinate policies to make Illinois a more welcoming and equitable state for immigrants and refugees.

“Using men, women, and children seeking asylum as political pawns is inhumane,” Welch said. “While he’s wasting $12 million taxpayer dollars on these stunts, Illinois will be working with state and federal officials to ensure these new Americans find opportunity, peace, and a new home in Illinois.”