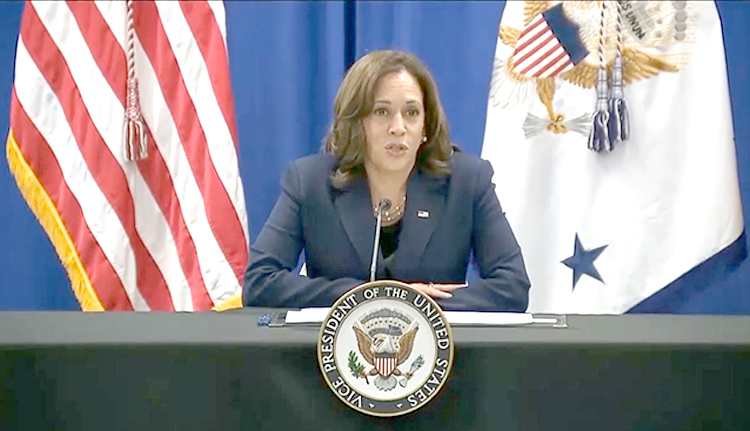 Vice President Kamala Harris came to Chicago Friday to rally voters who support abortion rights and urge them to turn out in the upcoming midterm elections. (Credit: Blueroomstream.com)

SPRINGFIELD – Vice President Kamala Harris came to Chicago Friday to rally voters who support abortion rights and urge them to turn out in the upcoming midterm elections.
Speaking at a roundtable discussion on reproductive rights at the University of Illinois Chicago, Harris said the recent U.S. Supreme Court decision overturning Roe v. Wade has put abortion rights at the forefront in races up and down the ballot.
“Who is your governor matters,” she said. “Whether they’re going to protect these rights and support these rights to freedom and liberty, it matters. Who is your attorney general matters. Whether they are going to protect and defend the principles ingrained in the Constitution of the United States, that matters. Who your local prosecutor is matters if you are in a place that has, as many are attempting to do, criminalized health care providers and are attempting to punish women.”
Harris was joined at the event by Gov. JB Pritzker, Chicago Mayor Lori Lightfoot, Attorney General Kwame Raoul, U.S. Rep. Danny Davis and a number of other abortion rights supporters. They were scheduled to hold a political rally on the UIC campus later in the day.
Her appearance came just 53 days before the Nov. 8 election when control of the U.S. House and Senate will be up for grabs and when all state-level elected offices in Illinois will be on the ballot as well.
Historically, the president’s party loses congressional seats in a midterm election. Democrats currently hold a slim, nine-vote majority in the U.S. House while the U.S. Senate is evenly divided, giving Harris the tie-breaking vote on many issues.
But Democrats are hopeful that the Supreme Court’s decision in Dobbs v. Jackson Women’s Health Organization, the decision that overturned Roe v. Wade, will energize Democratic, independent, and even some Republican voters and draw attention away from issues like rising inflation, crime and high gasoline prices.
Illinois Republicans, however, were quick to respond.
“Instead of ducking and deflecting, the Vice President needs to answer questions regarding the Biden Administration’s role in fueling the inflation crisis, and where she stands on Governor Pritzker and Mayor Lightfoot’s failure to keep our communities safe,” the Illinois Republican Party said in a statement released Friday morning.
Since the Dobbs decision, strict abortion restrictions have taken effect in many states, including all those that surround Illinois. That has made Illinois a destination for women seeking abortion who live in states where the procedure is now virtually banned or tightly regulated.
In 2019, however, Pritzker signed into law the Reproductive Health Act which, among other things, declares that access to abortion and other reproductive health care services is a “fundamental right” under Illinois law.
“There’s no doubt that our nation is headed down a dangerous spiral, one where a radical few dictate who does and doesn’t deserve rights,” Pritzker said during the event. “But here in Illinois, we will not go backwards.”
Megan Jeyifo, executive director of the Chicago Abortion Fund, a nonprofit group that provides financial, logistical and emotional support to people seeking abortion services, said her organization has seen requests for assistance skyrocket since the Dobbs decision.
“This year, we have received calls from over 4,500 people seeking support,” she said. “People from over 40 states and two countries have received our support accessing abortion care right here in Illinois.”
Lightfoot, meanwhile, said she plans to submit a budget proposal to the Chicago City Council in the coming weeks calling for increased funding of reproductive health care services in the city. She also said the city will refuse to cooperate with other states that seek to block their residents from traveling to Illinois for abortion care.
“Frankly, it reminds me, of the fugitive slave laws, people seeking freedom in another state,” she said. “Well, not here, not now, not in Chicago.”
Meanwhile, Illinois Right to Life issued a statement following Harris’ appearance saying those who are working to protect access to abortion are the ones taking extremist positions.
“Vice President Harris, Gov. Pritzker, and the abortion industry are offering women one solution: abortion,” the organization said. “Even worse, they have passed laws that serve to increase the profits of the abortion industry at the expense of women and young girls’ health and safety.”