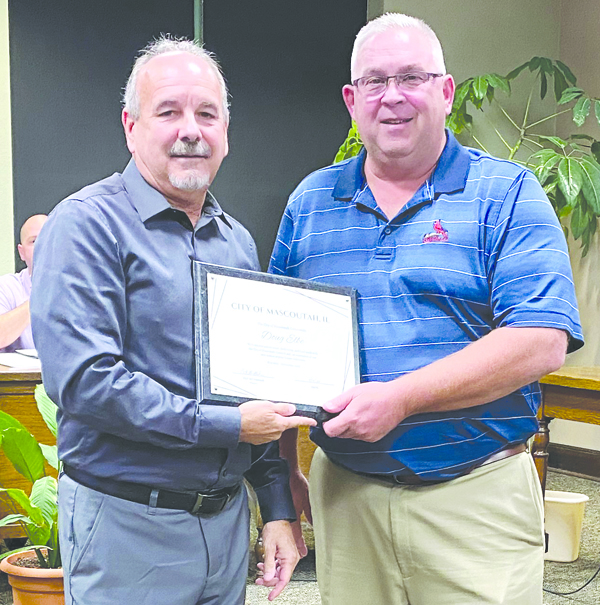 The City of Mascoutah held their regular council meeting on Monday, Sept. 19. The meeting was open to both in-person and virtual participation.
Councilman Doug Elbe resigned from his position on the council. He is leaving the area and will be unable to fulfill his duties. Elbe was sworn into office on May 6, 2021.
Mayor Pat McMahan presented a plaque to Elbe on behalf of the City. “Doug has been very helpful, and we appreciate his service and dedication to Mascoutah,” McMahan said.
Elbe thanked the Mayor and fellow councilmen. “I’ve enjoyed my time here but it is time to move on. Bigger things await,” Elbe said.
The next step will be to appoint a new councilman. If McMahan selects a candidate by the next council meeting, the remaining council members will vote on his nomination. At that time, he/she will be sworn into office.
Mascoutah City Manager Rebecca Ahlvin announced she will be on maternity leave starting approximately September 30 until late November. Assistant City Manager Kari Speir will assume Ahlvin’s duties until she returns.
Mascoutah resident James Shanks made his fourth consecutive appearance before the council during Public Comments. “Why does the State and City of Mascoutah taxes change every month? Where do we get our energy? There is corruption here.
Shanks told the Mayor, “You don’t believe in the Lord. I don’t care about your opinion. Taxes change on our bills every month. This is greed and corruption. I’ve lived here 15 years. I want to be reimbursed for these charges.”
Shanks was told his time at the podium was up. He said he would return to the next meeting.
Items on the agenda included:
• Report from Mascoutah Fire Chief Joe Zinck – The fire department was busy in August with the homecoming, receiving the new 3511 fire truck, and a heavy training schedule.
The new 3511 fire truck should be ready for service by September 24. The old fire truck was sold to the Maquoin Fire Protection District in west central Illinois.
MFD personnel attended training on traffic incident management recently.
The fire department has a full fire prevention schedule coming up in October. It includes: the police department’s National Night Out, and Fire Prevention Week (week of Oct. 10). All schools are scheduled for supervised fire drills, along with fire prevention visits for the Kindergarten classes.
The fire department will be holding their annual Mulligan & Chili on October 30. This will be a pre-order carry out only as it was the last two years.
• Report from Mascoutah Public Safety Director Scott Waldrup – The Mascoutah Police Department reported 277 incidents for August.
Officers issued 32 traffic citations, 70 warnings, and three DUI’s (driving under the influence).
Seven arrests were made during August.
There were 22 ordinance violations: one derelict vehicle, 11 weeds/grass violation, and 10 other nuisances.
Waldrup said there will be an active training class scheduled for officers from Mascoutah, New Baden, and Lebanon. It will be held at the Leu Civic Center.
The Mascoutah EMS responded to 96 calls in August.
• Report from Mascoutah Public Works Director Jesse Carlton – The Public Works Department completed 763 work orders in August.
Some, but not all, of the Street Department’s work orders included:
– replaced culvert on Christ Road;
– completed the 2022 oil and chip program;
– sprayed for mosquitoes throughout town;
– and swept streets throughout town.
Some, but not all, of the Water Department’s work orders included:
– repaired two leaks on water main at E. Poplar St.;
– turned on water for the Boeing Project and pressure tested lines;
– started winterizing the City Pool;
– assisted the Village of Freeburg with an emergency sewer issue;
– and flushed and serviced hydrants throughout the town.
Some, but not all, of the Electric Department’s work orders included:
– installed permanent services at 700 block of Topaz Ct. and 200 block of Mason;
– relocated utilities at 600 block of Mortar St;
– set new transformer at the Wastewater Treatment Plant;
– repaired lines that were taken down from a tree limb at the 900 block of W. Poplar St;
– and replaced blown arrestor at Rt. 4 and Rt. 161.
• Mascoutah City Engineer report – According to City Engineer Tom Quirk’s report to the Council, Onyz Drive pavement is failing likely due to poor drainage conditions and storm water that periodically overtops the road.
Long term plans call for Onyx Drive to be widened to become a collector road if the land to the north is developed.
The report stated that since the exiting Onyx Drive pavement is failing, the City is starting engineering work to consider raising the road profile and improving drainage. The road will not be widened at this time but will be rebuilt in a way that would still allow future widening.
Engineering and right-of-way acquisition is underway.
It was also reported on a project consisting of the reconstruction of S. County Road from Main Street to Eisenhower St., and the reconstruction of McKinley St. from S. County Rd. to the recently constructed Lakeside Estates subdivision.
Improvements will include the construction of storm sewer, concrete curb & gutter, concrete sidewalk, concrete driveway aprons, and hot-mix asphalt pavement on new aggregate base. The total length is approximately 1,500 feet.
Rebuild Illinois Bond Grant funds and MFT funds will be utilized for this project.
• Councilmen authorized the sale of a 2013 Ford Explorer.
• The City is applying for an Illinois Transportation Enhancement Program (ITEP) grant to help pay for the engineering and construction of a new shared use pedestrian and bicycle path from South 10th St. to County Rd, connecting the L&N Railway Trail to the Berm Trail. If awarded, the grant would pay for approximately 80 percent of the project cost with the remaining 20 percent to be paid for by the City.
The next Mascoutah City Council meeting will be held Monday, Oct. 3, 7 p.m. at City Hall.