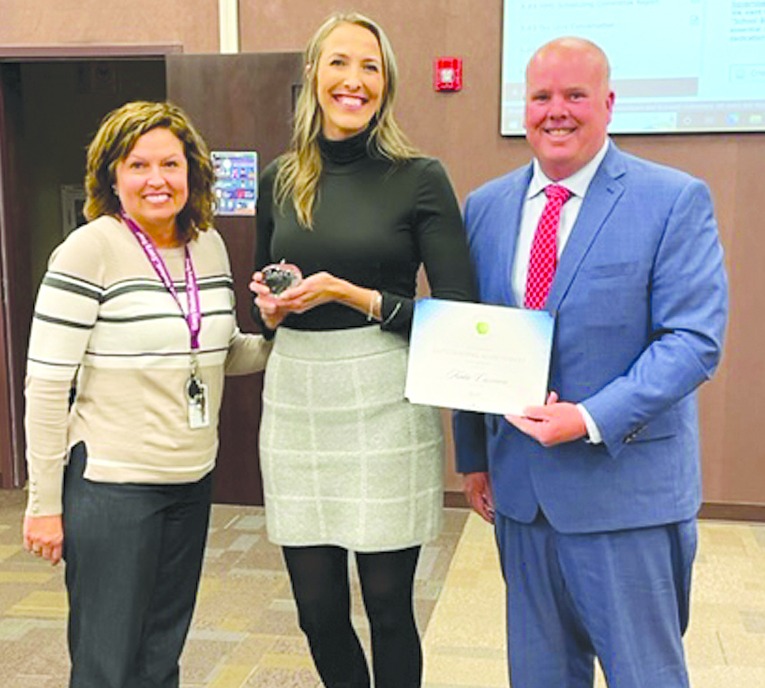 MASCOUTAH – At its November meeting, the Mascoutah District 19 Board got an early look at the District’s upcoming budget environment from Dr. Frank Williams, executive Director of Business, as the District gets ready to make its levy requests known at the next Board meeting in December. Dr. Williams told the Board that he expects that the District’s EAV (Equalized Annual Valuation) to jump by nearly 11 percent, from $281.7 million for this fiscal year to approximately $312 million for FY24, an apparent result of the recent rapid inflation.
In December, the Board will determine the Levy request for FY24, using an inflated EAV to ensure capture of all available dollars. In March, the Board will approve the Levy extension of the amount of money needed to assist in operating the District for FY24. The final request can’t be greater than the Levy request made in December. The rate will be determined by the St. Clair County clerk and will be based on the March request and the final EAV.
The District’s current extension is $13.6 million for FY23 with a tax rate of 4.8380.
Following Dr. Williams’ presentation, the Board approved Dec. 20 as the public hearing date for the Tax Year 2022 property tax levy.
During the meeting, the Board also recognized Katie Crismon, a 5th grade teacher at Mascoutah Elementary, who was the District’s Emerson Award Winner.
The Excellence in Teaching Awards program, sponsored by Emerson, annually recognizes educators in the St. Louis metropolitan area, from kindergarten teachers to college professors, who are examples of excellence in their field.
Crismon will be recognized at a special event hosted by Emerson later this year.
In other business the Board:
• Approved a contract with Goshen Education Consulting for External Evaluation on the 2023 DoDEA (Department of Defense Education Activity) grant for $100,000, to be paid over a five-year period. The contract sets up Goshen as the external evaluator for the District’s recently awarded $2 million FY22 DoDEA grant. Every DoDEA grant requires an evaluator to collect data and compile the annual progress reports that keep DoDEA informed of the District’s progress toward grant goals. The cost of the evaluator will be paid for by the grant.
• Approved changes to the Athletic Extra Duty Pay Schedule as requested by the District’s athletic directors, increasing the amount paid. The District has not raised rates in several years and because of these it has been difficult to find workers. The new rates will bring the District close to the state’s $15 an hour minimum wage.
• Discussed a fee increase for the District’s Before School Care portion of Extended Time. The program is offered at Mascoutah and Wingate Elementary Schools only because Scott Elementary uses the base youth center.
The morning fee would increase to $10 and the afternoon fee will remain at $10. In addition to the increase in the morning fee, students would receive breakfast at no cost. Currently there are 220 students that use the program.  A motion was made to defer action on this item until fall of 2023.
• Approved a contract with Christ Brothers to resurface the walking path at Scott Elementary for $24,800. The trail on the school grounds, funded by Scott Credit Union, was established as a crushed lime path, but has been difficult to maintain. The Building Committee recommended that the path be asphalted.
• Approved a new video scoreboard for the large gym at Mascoutah High School for $64,985. The cost of the board is $54,985 with the additional $10,000 to be used to move and mount the current scoreboard in the gym at Mascoutah Middle School.
• Approved the Intergovernmental Cooperation Agreement with Southwest Illinois College for the Running Start program for the 2023-24 school year. The program allows juniors and seniors to attend SWIC full time and earn college credits as well as high school credits for graduation from MHS. Currently there are eight juniors and 25 seniors participating in the program. The program carries a $20,000 scholarship fund.
The Board approved the following certified personnel actions:
Hired Cara Maher as RTL teacher at Wingate Elementary.
Accepted the resignation of Sarah Loepker as a Spanish teacher at Mascoutah High School.
The Board approved the following classified personnel actions:
Hired Samantha Au as an instructional aide at SES, Briel Cook as a supervisory aide at WES, and Ivy Goold for food services at MHS.
Approved the transfer of Derek Moore as a building technician at MES to technical coordinator/lead tech at MHS and District.
Accepted the resignation of Robin Foster as an instructional aide at MMS and Cheyanne Kimmle as an extended time student worker at MES.
Accepted the retirement of Cheryl Rasch as an administrative assistant.
Approved Michelle Hasheider as a volunteer assistant girls basketball coach at MHS, and Randy Turner as an assistant wrestling coach at MHS.