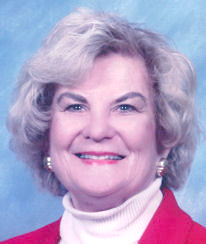 Lorna Jean Riess, nee White, 85, of Marissa, IL, born Aug. 29, 1932 in Pope County, IL, died peacefully on May 22, 2018 surrounded by family and friends.
Jean grew up in Belleville with her uncle and aunt, Bill and Faye, nee White, Willis.  She loved to tell stories of spending childhood summer vacations with her grandparents on their farm in Golconda, IL.

She graduated from Mascoutah High School and then attended Belleville Area College, after which she worked at Scott Air Force Base.  She married Donald Weston Riess on April 25, 1953, at Trinity Evangelical Church in Belleville.  They were blessed with two sons, D. Weston “Wes” Riess and Jeffrey Barton “Jeff” Riess.

In 1964, Jean and Don established the Riess Ford Dealership in Marissa, where she continued as president.  In 2014, the dealership was honored by Ford Motor Company with a special 50-year recognition for their success and still continues today.

She was an active and dedicated member of Friedens United Church of Christ of Marissa and of the Marissa Chamber of Commerce.  She was an accomplished businesswoman and shared her business acumen by serving on the boards of Citizens Community Bank in Mascoutah and The Enclave Hotel and Suites in Orlando, Florida.

She loved traveling, gardening, theater, food and wine.  She had a passion for antiques and collecting art from across the world.  For decades, she entertained a huge collection of family – both biological and chosen – for a grand 4th of July celebration. After “retirement” Jean spent the colder months at her home in Orlando, FL where she expanded her community of friends – all honored experience her trademark blend of compassion and determination.
She is preceded in death by her husband, Don; son, Jeff; her parents, parents-in-law; three brothers-in-law; and a sister-in-law.

She is survived by her son, Wes, and granddaughter, Kendall, of St. Louis; her daughter-in-law, Debbie Riess of O’Fallon, Illinois; granddaughter, Kati (Shawn) Sturms, and great-grandson, Aiden, of Charleston, South Carolina; grandson, Jeffrey Riess of Belleville; brother, Bill (Penny) Willis, of Ohio; sisters-in-law, June Riess and Marilyn Welch of Mascoutah; generations of nephews and nieces who adored her; and many friends who highly cherish her friendship.
Memorials by be made to Friedens United Church of Christ, 820 N. Main St., Marissa, IL 62257; or St. John United Church of Christ, 55 W. Church St., Mascoutah, IL 62258.  Condolences can be sent to the family by visiting mollfuneralhome.com.
Visitation:  Visitation will be from 4 to 8 p.m. Friday, May 25, 2018 at the Moll Funeral Home in Mascoutah, IL; and from 9 to 10 a.m. Saturday, May 26, 2018 at Friedens United Church of Christ, Marissa, IL.

Funeral:  Funeral services will be held 10 a.m. Saturday, May 26, 2018 at Friedens United Church of Christ with the Rev. Dr. Don Wagner officiating.  Burial will be in the Mascoutah City Cemetery, Mascoutah, IL.