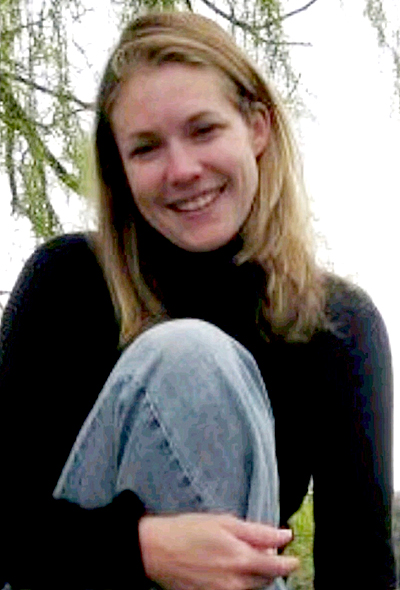 Our precious, ferocious Erin filled her 39 years on earth with meaning, adventure, curiosity, good humor, and good works.
Daughter of Ken and Mary Sharkey, Erin’s two children (Aiden and Isabella) were her reason to never stop fighting and to always keep seeking the next cancer treatment, despite the resulting agony and suffering she endured. Our warrior fought for every breath so she could stay here with her kids and her husband Eduardo Ruiz, and even at her lowest points, she never lost her sense of humor or her dedication to being a mother.
Erin loved to travel, whether she was backpacking in Europe, caravanning in New Zealand with her husband Ed, solo traveling through Thailand, scaling the Half Dome Summit in Yosemite with her dad Ken, or playing with her kids on the beaches in Costa Rica.
She also volunteered with Habitat for Humanity and built homes in Bali, Indonesia. She was a dedicated and compassionate believer in “paying it forward,” and spent many years mentoring through the Big Brother, Big Sister program, as well as working on Habitat projects in the States and donating her time to local charities and poverty-alleviating organizations.  Even during her many chemotherapy treatments and painful surgeries, she would find a way to make it to Habitat sites and soup kitchens to give what little energy she had to those in need.
After graduating from Governor French Academy (Belleville, IL) at just 16 years old, Erin went on to Penn State University where she earned a B.A in Architectural Engineering in 2004. Later, she received her M.B.A. from Loyola University Maryland. Before her illness, she was a Senior Project Manager at James G. Davis Construction (DAVIS) and previously an Area Superintendent and Project Manager at Gilbane Building Company.
At DAVIS, Erin was the onsite Project Engineer for the construction of the Canton Crossing Tower in Baltimore, MD, as well as the Site Superintendent for the $5M improvement of St. Mary’s Hospital in Leonardtown, MD.
These massive buildings she helped to create now soar the city’s skylines, but they are dwarfed by the impact Erin had on our lives and the phenomenal love she left behind.
Erin was a lifelong St. Louis Cardinals and St. Louis Blues fan. She loved to run and trained hard to accomplish her first half-marathon, and she also enjoyed kayaking with her husband and kids.
Erin was a steadfast member of the Church of Christ and a devoted lover of Jesus, who has now called her to his heavenly home, in a room he has painstakingly prepared just for her.
To list the people who mourn her passing would be too great in number. Alongside her parents, her husband, and her children, Erin’s siblings Nolan Sharkey (Andreea Sharkey) and Bridget Sharkey (Ben Elson, Maeve Elson, Malcolm Elson) are forever grateful for Erin’s presence in their lives and will never cease to remember and honor her legacy of bravery, selflessness, and determination.
Erin: We love you always, and our stories and memories of you shall be endless, just like your spirit.
Erin will be laid to rest in a private family ceremony at her parents’ farm in Nashville, IL. In lieu of flowers, please consider donating your time or money to Habitat for Humanity or Big Brothers Big Sisters.
Arrangements by Kassly Mortuary, Fairview Heights IL