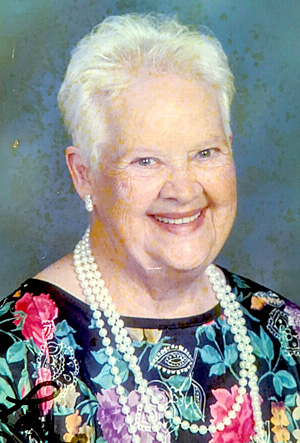 Della Lucille Pokojski (Nee Nettles), 92, of Mascoutah, spent her last Mother’s Day on earth with her two surviving children by her side then entered into a peaceful rest on May 8, 2022 at Countryside Manor in Aviston to prepare and meet the rest of her children and family waiting for her on the other side.
She was born August 13, 1929 in Odin Township, the daughter of Stella Lucille Nettles. She married Edward Pokojski August 21, 1948 at St. Lawrence Parish in Sandoval and he preceded her in death April 26, 2004.
Della is survived by her son, Michael (Kathleen) Pokojski of New Baden; her daughter, Mary (Kenneth) Sullivan of Venedy; 11 grandchildren; 18 great-grandchildren; daughters-in-law, Deborah Pokojski of Haleyville, AL, and Sue Pokojski of Trenton; and a son-in-law, Mitch Rick of Waterloo.
In addition to her mother and husband she endured the passing of her sons, Anthony Pokojski and David Pokojski; a daughter, Patricia Rick; and her brother, Melvin Phelps.
Della was a homemaker and a member of St. Mary’s Parish in Trenton. She enjoyed fishing, camping, gardening, canning, sewing, quilting, crocheting, and playing all kinds of board games and cards with her family and friends, especially her grandkids.
A Funeral Mass of Christian Burial will be held at 10 a.m. Tuesday, May 17, 2022 at St. George Catholic Church in New Baden with Rev. Gene Neff officiating. Burial will follow at Sandoval Cemetery in Sandoval.
Visitation will be held Tuesday, May 17, 2022 from 8:30 a.m. until 9:45 a.m. at St. George Catholic Church in New Baden.
In lieu of flowers, the family requests that memorials made in memory of Della are suggested to the Salvation Army, Sandoval Cemetery, or Hospice of Southern Illinois and will be received at the church or Nordike Funeral Home, 15 E. Hanover St., New Baden, IL 62265 who is serving the family. Condolences may be sent to the family at www.nordikefuneralhome.com
Nordike Funeral Home
New Baden, IL